You are here: Home / Who We Are / Swami Shri Ashutosh Muni

In gratitude for the One who lights my way, I joyously share something about the life of our Bapuji with you.—Jahnvi

Swami Shri Ashutosh Muni was born in Gujarat, India in 1953. He met his Guru at birth because his mother was a disciple of Swami Kripalvanandji. At the age of seven he was sent to military school away from his family and returned home for only one month each year. However, during those visits he was privileged to be able to visit Swami Kripalvanandji in his mother’s company. With the completion of his military schooling he was prepared to become a pilot.

However, in 1970, at the insistence of his family and the urging of his Guru, he gained admission to medical school in Baroda instead. He visited Swami Kripalvanandji in Kayavarohan every weekend for the entire seven years of his medical training. Unfailingly, he studied with Swami Kripalvanandji every weekend, learning directly from him; never missing an opportunity to be near his Guru.

Swami Kripalvanandji left the states in the last week of September, 1981. He passed away in December of 1981.

Swami Ashutosh Muni’s life began to take a different shape. In seclusion and silence, he immersed himself in sadhana (spiritual practices) for over 25 years between the two locations of Malav India and the United States. In December of 2005 He came out of seclusion and has begun to teach around the world, touching hearts, transforming lives, and awakening souls.

Swami Ashutosh Muni has created a magnificent Mahasamadhi temple in Malav (Panchmahal District), Gujarat, India in reverence and loving memory of His beloved Master and Guru Swami Kripalvanandji. He has never asked for any donations nor accepted any donations from any person whatsoever. Demonstrating his genuine love for humanity, he has built a free English medium school in Malav from the ground up, which provides the highest quality education for grades K-12, the renovation of a hospital that offers quality healthcare to the village of Malav and some 50,000 people from the surrounding area.

His teaching style weaves threads of humor, directness, compassion, patience, devotion and truth. He is remarkably in tune with our contemporary culture and what he speaks about is always for the benefit of all. The integrity with which he teaches, the depth of wisdom that he shares, and the love that he radiates need only be experienced to know he is a rare being. He is the living example of the pure teachings of our yoga lineage. He embodies the highest principles of respect and love for truth, teacher, family, scripture, and God. 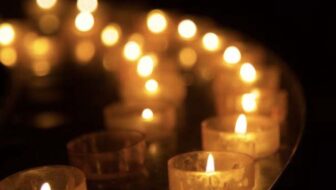 What lies behind us and what lies before us are tiny matters compared to what lies within us.
—Ralph Waldo Emerson